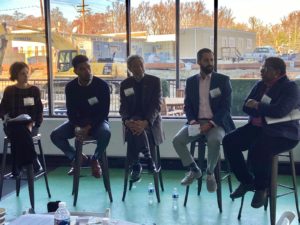 On Thursday, December 12, 2019 the Leadership Institute class met to discuss topics and issues related to housing and affordability in the DC region. The class spent the day at a Chevy Chase Land Trust office building in Chevy Chase, MD.

The class started the day with discussing their housing scenarios provided to them prior to the class day. Each scenario allowed the class members to think through real life situations where individuals have to face certain housing crises. The class engaged in a robust conversation surrounding the scenarios.

This activity was followed by an informative and engaging panel moderated by Hilary Chapman Housing Program Manager, COG; including  Kimberly Driggins, Executive Director, Washington Housing Conversancy; Don Edwards, CEO Justice and Sustainability Associates; Corey Powell, COO, Dantes Partners, and Feras Qumseya, Vice President- Development, Foulger Pratt. The group discussed the production and preservation of mixed-income and affordable housing for the region, what tools are being used for this, and what do we need to do in the future.

The class also learned about the new Bozzuto Chevy Chase Lake project, which incorporates retail and residential properties, and will be all connected to the incoming Purple Line. After learning about this new project, McLean Quinn from EYA and Marcus Ervin from HOC spoke about their joint project, The Lindley. The Lindley is a great example of mixed income housing for Montgomery County. The class then had a chance to tour the building and ask many questions surrounding the partnership, and what it took to make this building successful.