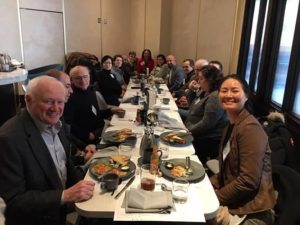 In December, members from our Placemaking Initiative Council participated in a tour of Ballston Quarter in Arlington, VA. Previously known as Ballston Common Mall, the area was updated in the 1980’s in partnership with Arlington County. The mall contained retail and dining options, as well as the practice center for the region’s hockey team, the Washington Capitals. Plans to update the area again began in the 2010’s, including the formal closure of the mall in 2016 before large-scale development occurred.

ULI Washington members first met at Ted’s Bulletin, a restaurant that opened in the summer of 2019 after a successful first location in Washington D.C.’s 14th Street corridor. After networking and tasting the restaurant’s breakfast options, the group was joined by representatives from RD Collaborative including Francesca Franchi, a principal at the firm, amongst other members of her team.

Francesca and her colleagues spoke about their experiences designing the new Ballston Quarter, highlighting changing trends in retail, food, residential, and transit-oriented development since the Mall’s initial development over forty years earlier. With multiple accessible metro rail stations and connectivity to bus routes connecting both D.C. and further into Arlington County, the team detailed plans around parking and mobility that sought to support the day-to-day needs of Ballston Quarter as well as encouraging visitors to make use of public transit.

Walkability and placemaking principles served to enhance the pedestrian experience, such as a walking bridge that connected visitors to the metro station ensuring safe travel across traffic as well as for any weather condition. Additionally, the need to make a space that served a variety of demographics remained a core design concept. The team identified that Ballston Quarter would be supported by a variety of groups such as young professionals, families with children, and elders. Ensuring a mix of services within Ballston Quarter was important to maintain this balance, but so too was the need for public convening spaces as well as accessible pathways throughout the Quarter.

Members joined the RD Collaborative team for a walking tour of the area after breakfast, highlighting both the established businesses as well as the movement between spaces. ULI Washington’s Placemaking Initiative Council continues its exploration of placemaking efforts throughout the region. Members participating in the tour learned about the various design principles active throughout Ballston Quarter, with the hopes of applying successful lessons in their own work and communities.