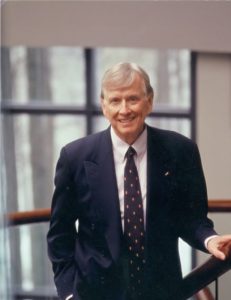 As many of you may already know, we recently lost a great ULI friend. Jim Todd, ULI Life Trustee, Foundation supporter, and leader of the Institute and industry, passed away in late February.

Since joining ULI in 1975, Jim was active in all aspects of the Institute and was incredibly generous with his time and resources. He held several top leadership positions on ULI’s governing boards.

Knowing the importance of philanthropy, Jim was a member of the Julia Morgan Society for the ULI Foundation and served on both the Foundation Board and Campaign Committee. He was a member of a variety of product councils throughout his time with ULI and chaired several, including the Infill Development Council, the Community Development Council, and the Small-Scale Development Council. He was on the inaugural ULI Prize for Visionaries in Urban Development? management committee, helping steer the direction of our most prestigious award. Understanding the impact ULI can have on communities and how important it is to share knowledge, Jim served on and sponsored several Advisory Services panels, as well as served as the chair of the Advisory Services Committee, which helped shape the direction of the program. Locally, he was active in ULI Washington as a member of the executive committee and spoke at many local events.

Jim lived the ULI mission in his work. Since the beginning of his real estate career in 1968, he brought the best practices learned through ULI to his development of signature projects such as Reston Town Center in Virginia, National Harbor in Maryland, and the redevelopment of downtown Silver Spring. Jim retired as CEO from the Peterson Companies after growing it to a nationally acclaimed development company. But anyone who knows Jim knows he never really retired and remained engaged in real estate as well as the many philanthropic and community organizations that were important to him.

We will miss Jim and all he brought to ULI and the industry. When we are back together, we will be sure to honor his memory.