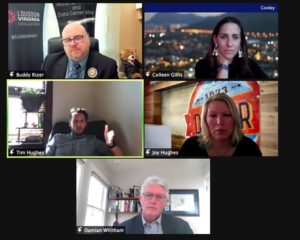 While Loudoun County is a well-oiled machine, Buddy said competition has never been tougher for data centers. Eighty-five percent of the tax revenue is from the equipment inside the data centers, which is refreshed every 3-5 years. So it’s easy for clients to reevaluate new locations when they make those equipment refreshes. While all communities in the DMV are bullish on getting into the data center space, with its benefits to the tax base, Loudoun County certainly has an edge with its institutional knowledge and experience. Tax incentives are just one factor of the equation.  It is also important that the local jurisdictions have the required institutional knowledge to quickly process the necessary permits, and sufficient power generation facilities to support them. While Maryland just recently adopted tax incentives for data centers, the Maryland jurisdictions have a steep learning curve when it comes to permitting knowledge.

There are a lot of communities in the I-95 corridor that are positioning themselves to attract data centers, said Damian. According to Damian, Virginia was a perfect storm between the government, having fiber in the ground already, and Loudoun County’s early efforts to attract the sector. “Those things are hard to recreate, but there will be other communities where these elements align,” he said. Tim agreed that local jurisdictions have plenty of opportunities to grow. “We can point at Loudoun as a continued success, unequivocally the data center capital of the world,” he said. But because the equipment is refreshed on a consistent basis, it is important that local jurisdictions continue to strive to preserve their position relative to other locations, or clients may re-evaluate their chosen locality when making their equipment refreshes. This is important, as the demand for data centers is anticipated to remain strong.

Even before starting Moya Design Partners, I wanted to ensure that my designs and projects reflected my personal mission, supporting...