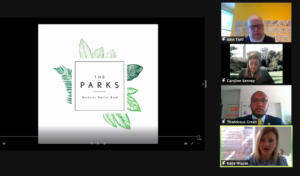 On Wednesday October 7, ULI Washington’s Young Leaders’ Programs Committee hosted “The Parks at Walter Reed: Creating a City within a City.” Over 140 real estate professionals joined the virtual tour and panel-style discussion to take an in-depth look at the history of Walter Reed Army Medical Center Campus, the current development progress, and the future for the master plan community. The Campus encompasses a dynamic 66-Acres in the heart of Northwest DC and the master developer, a partnership between Hines, Urban Atlantic and Triden Development Group, plans to convert the campus to a vibrant 3.1 M SF mixed-use community delivering across multiple phases between now and 2028.

Panelists explored the unique challenges of a large phased, master plan development and shared how the previously insulated campus was reintegrated into both the local community and greater DC with a complementary mix of uses.

Thaddeaus began with the background and history of the campus, from its inception in 1909 to the eventual RFP process, as well as the District’s goals for the Project. Transferring control of the site took approximately 11 years, beginning in 2005 when the Department of Defense recommended that Walter Reed be relocated as part of BRAC. Central to the transfer process was an extensive level of community outreach through the Walter Reed Local Redevelopment Authority (“LRA”).  From this outreach and in coordination with the District’s goals, the LRA focused on four main objectives; integrate the city with the community, provide a mix of uses, create jobs and revenue for DC and activate the site. Public Benefits and nonprofits make up a large portion of the site’s programming, and DMPED is proud to note that in staying true to site’s roots, the first residents welcomed to the campus were 77 previously homeless veterans.

John then discussed the master developers’ value proposition and how Torti Gallas + Partners balanced community input and LRA requirements to develop an urban design that will serve as benchmark for future development in the District. DC has always been peering into Walter Reed through a 6-foot-high wrought iron fence and so much consideration was given to crafting the Village Center, Great Lawn and many parks to ensure the reimagined campus both invited outsiders in as well as blended in with the local community. While the Project was already zoned to allow redevelopment before the site transfer, the campus’s historic nature meant that everything was subject to the Historic Preservation Review Board New Construction and Preservation standards. To help facilitate an efficient and successful design and approval process in this context, the team first worked to establish a set of approved design guidelines, which they noted as critical to the development’s timeline and success.

Caroline explained that after the foundations laid by their public partners through seven years of community-based engagement, the master developer’s first job was to further plan for a phased balance of use types that had market viability and were aligned with the District’s planning goals. Programming for the campus is well over two-thirds residential, but the deal structure and zoning allowed for considerable flexibility for how it is broken out between condos, townhomes, apartments, and co-living. Co-living is an example of the Project’s programming evolution. In 2013, when initial plans were submitted, co-living was not a contemplated use, but just as the phasing strategy and market has evolved over time, so has the allocation of uses. Beyond the residential, the District and master developer both put an emphasis on education-based non-profits. There are multiple schools on site and the development plan includes an Innovation Lab by Children’s National Hospital that will bring over 1,000 day-time employees in the first phase of delivery.

In wrapping up the panel, Caroline noted a few of the keys to success for the master development. Beyond generally planning for on time and on budget delivery, appropriately coupling phased horizontal infrastructure work with revenue generating vertical development was key. For jobs of this scale, and as so much of the history of the site and status of in place infrastructure was unknown, Caroline further stressed the significance of including a healthy contingency. Next, it was important to the success of the site that the master developer create value through branding and interim activation with community engagement. Finally, team collaboration and communication were paramount, whether that be community-based design, coordination with DC partners and local stakeholders, or amongst the master developer partners. 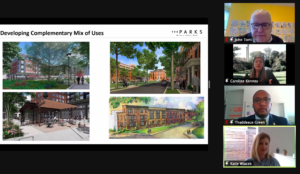 At the conclusion of the panel session, attendees participated in a virtual tour of The Parks at Walter Reed produced by the Young Leaders’ Program Committee. The tour showcased the existing campus with several buildings under construction, as well as a simulation of the future Walter Reed neighborhood once completed. After, attendees had a chance to participate in a Q&A session with the panel. Questions included a range of topics including targeted retail tenants/uses, sustainability and environmental goals, horizontal development and the vertical sale, opportunity zone financing, modular construction, among others.

Lastly, we would like to thank all of our panelists and attendees for sharing their knowledge and experience on such a unique and iconic DC site.