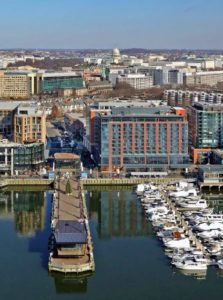 On October 16th, approximately 75+ ULI members gathered in the rooftop conference center at 1000 Maine Avenue to experience the outstanding views of the sky, river, and development at The Wharf.  Key project executives who were instrumental in bringing this world-class waterfront destination to life spoke to the assembled group about the history of the site, the development of the project, and what is going to happen in Phase 2.  Speakers included:

The city-owned site is being developed under a 99-year ground lease with the District by Hoffman-Madison Waterfront, a joint venture between Hoffman & Associates and Madison Marquette as well as ER Bacon Development, City Partners, Paramount Development and Triden Development.

The Fish Market was established in 1805, and the area where The Wharf now stands became a thriving maritime community.  In the late 1800s, the Potomac River was dredged and the fill was used to create East Potomac Park and the Washington Channel. In the 1950s the area was transformed again by the first federally funded and largest Urban Renewal project in U.S. history, which created highways and superblocks that cut off the waterfront from the rest of the City despite being in the shadow of the National Capital and Mall. 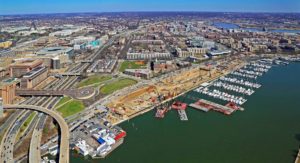 By 2000, it was clear that action needed to be taken to reinvigorate the area.  In 2000, the Anacostia Waterfront Initiative was launched and by 2003, a small area plan for the area was completed.  In 2004, the Anacostia Waterfront Corporation was created and by 2006, a RFEI was issued for waterfront redevelopment.  PN Hoffman and Streuver Brothers, a Baltimore developer, were selected to create and implement development plans for the site.  Streuver was a casualty of the financial crisis of 2008 and a new JV partner was found in Madison Marquette.  In 2013, a PUD for the project was approved and construction started in 2014.  The grand opening for the first phase of the project took place in 2017.  The entire development opened at the same time, creating an instant “place” for the waterfront. 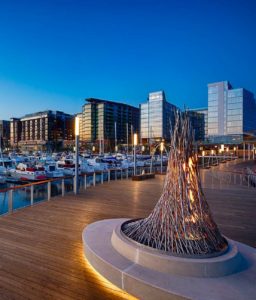 There are multiple Sustainability components in Phase I.  The entire development is LEED ND Gold and all of the buildings are LEED ND Gold or Silver, plus the development is 18” above the floodplain.  There is a 250-kW co-gen plant on site.  The stormwater management system captures 3.2 storm onsite and 1/3 of the site is permeable (as opposed to 10 percent previously).  There are numerous green roofs and cisterns on site that collect 11 million gallons of water per year that is used in landscaping, restrooms and a cooling tower. 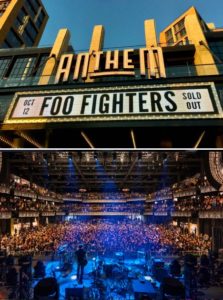 The project required eight DC City Council votes, four acts of Congress, more than 800 community meetings over 10 years, and the largest tax increment financing (TIF) in the city’s history ($198 M). The Wharf also met the District’s affordable housing, local hiring and contracting requirements, including 30 percent of apartments affordable at 30/60/100 percent of Area Median Income (AMI) and is expected to generate over $70 M in new taxes annually.

Kudos to teacher Andrea Martinez and the students in her Architecture classes at Phelps ACE High School for doing a great job with...